This multimedia-driven world is hungry for content. Despite halting shoots and gigs, there must be new pictures, videos, shows, and posts to appease the masses. Plus, artists need to pay the bills in the midst of the COVID-19 pandemic.

It’s a good thing that a new kind of photoshoots is being conducted, as the multimedia industry adapts with social distancing: virtual photoshoots. In virtual photoshoots, you don’t need to go to the location and work with an entire team of creatives and models. All you need is a video conference app, the power of screenshots, and an optional camera.

People can see the outcomes in the popular Filipino Boys Love series, Gameboys and Hello Stranger. The shows, showing the power of video calls and social media, follow the lives of the characters through a bunch of video calls with friends and screen recordings of their social media activity.

Another example would be Khalil Ramos and Gabbi Garcia’s virtual photo shoot that turned out to be incredibly pretty and creative. The two, being apart, went on a video call—with Gabbi being the model and Khalil as the photographer. Khalil placed his iPad, where the video call with Gabbi was, in setups such as the garden and the refrigerator. Then, Gabbi poses, and Khalil takes a picture.

These kinds of alternatives do away with health risks that come with being around other people nowadays. In this setting, the model takes the pictures in their home while listening to the directions of the team via a video call.

Unfortunately, the model does most of the dirty work. For equipment concerns, the models receive them via drop off. They consult the team on how to assemble the equipment, adjust them, and arrange them. The model does their own hair and makeup with the direction of the actual MUA in the video call. During the shoot itself, the model becomes the beauty portrait photographer since they take the picture themselves. The creative team is there the entire time to give artistic directions, but what can a person inside a screen do? Overall, a virtual photoshoot is like a crash course of every role in the production team.

Additionally, taking a picture of the laptop screen—by another person in the team—could result in a distorted image because of the refresh rate of the screen. Typically, there will be lines and pixels, destroying the quality of the photo. 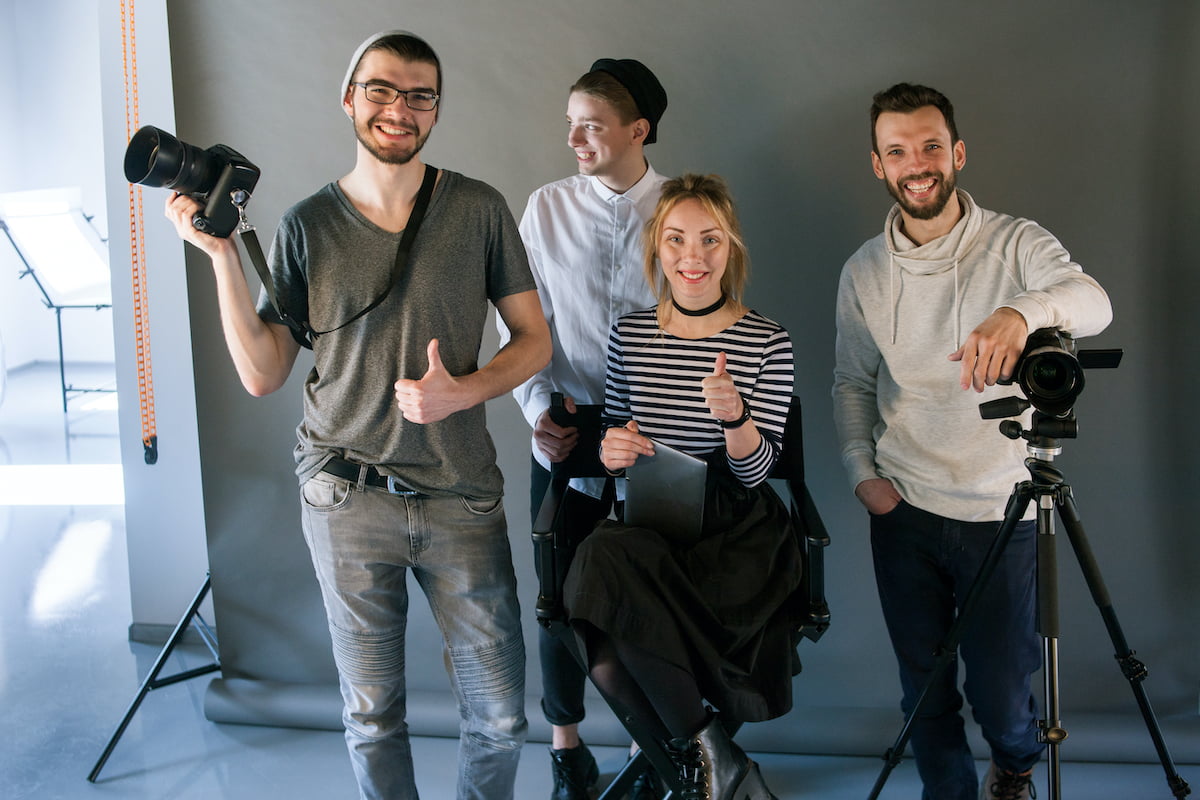 1. Use the Khalil and Gabbi’s Style

What’s creative and versatile about their style is that it looks like the model is present in the moment. It’s like the model is part of the scenery in front of the camera, and they are incorporated into the context of the setup. It’s also portable since the iPad can be transferred and placed on almost every surface that can hold it. You also aren’t constrained to the low-quality picture of a screenshot.

These screenshots are the closest teams that can get to a real-life shoot. The outcome will look like it was taken physically with everyone present in the room. There is no screen between the photographer and the model, as it appears in the photo. This is the easiest to do for the production team since they can see the outcome right away, and the model doesn’t need to set a timer for a camera.

Because there are location constraints, there might not be a wide variety of backdrops to choose from. You can always rearrange things to make them look interesting on camera, or you can see your place in a whole new lens. The bathroom tiles can be a pattern background. You can also take the photo from a low angle to use the sky as a background. Anything can be a prop as well, whether it is a hanger, a pot, a ceramic, etc. Just make sure that the setup matches the client brief.

Whether it’s a paid gig or a fun shoot, you can experiment with so many things virtually. The setup features an iPad and everyday things at home. Maybe there are certain spots at home that are photogenic. It’s time to get to know your place on a different level while doing a photo shoot.